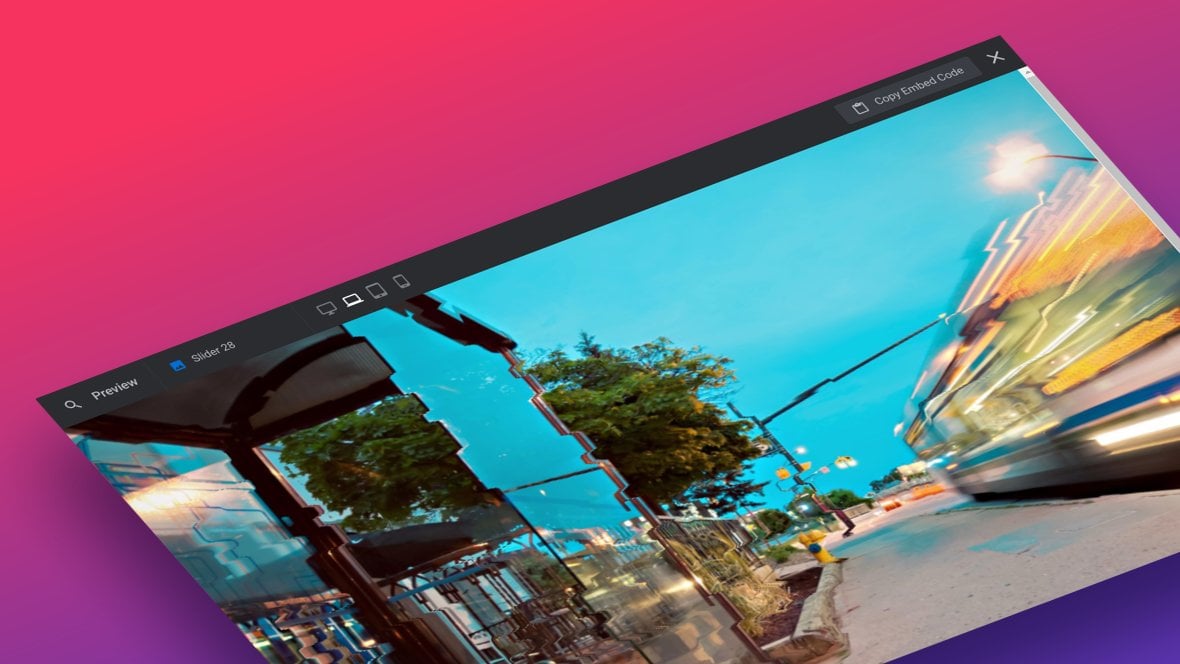 What Does the Distortion Addon Do?

The Distortion Addon allows you to apply a distorting-style effect to the background image of any slide [?] A "slide" in Slider Revolution is a container into which multiple layers can be added, with layers in turn acting as containers for various forms of media such as images, text, video, audio, buttons, and special effects.

With it you can create rippling underwater effects, moving cloud effects, glitch effects and more, as well as create custom effects of your own.

The distortion effect can be set to display automatically, it can be interactive, or it can be a mixture of both, allowing you to create mesmerizing imagery that keeps your visitors engaged.

To get started with the Distortion addon [?] Addons extend the functionality of Slider Revolution, adding new controls to the module editor and allowing you to do extra things with your design.

There are dozens of addons available, all included with the full version of Slider Revolution. you’ll first need to install and enable it.

After installing and enabling the Distortion addon, you’ll need to activate it within your module [?] A module in Slider Revolution acts as a container for slides, which in turn act as containers for layers. Modules are created and edited with the module editor.

The Distortion addon is activated on a per slide basis. This allows you to create slideshows where some slides can have the effect while others don’t, giving you complete control.

For each slide on which you want to use distortion, go to the Slide Options tab, then the Distortion sub-section, and in the Distortion Effect panel toggle the Active option to ON:

Note: The distortion effect is applied to a slide’s background [?] A "background" in Slider Revolution is a type of layer that is always present in every module, and is always visually behind all other layers.

A background can be transparent, a flat color, a gradient, an image, or a video. It can be animated in the same way as other layers can be, however it cannot be deleted. image. You can quickly add a main background image by going to the Slide Options tab, then the Background sub-section, and then in the Source panel click either Media Library to use your own image, or Object Library to choose an image from Slider Revolution’s [?] Slider Revolution is a website content creation tool with a focus on captivating animation and stunning visual effects.

It began its life as a plugin for creating slideshows, but has evolved into a fully fledged piece of design software. free image library.

If you need further help with background images, refer to our guide on Changing Template Background Colors and Images to learn more.

After activating distortion for a slide, several new options and panels will appear below:

All the configuration for the slide’s distortion effects can be done via these options and panels.

For a complete guide to these options, check out the next page of the manual: Customizing Distortion Effects

Click to expand the library and you will see it contains an area for ready-made distortion effects, named Distortion Presets, and an area in which you can save your own Custom Presets:

To apply a distortion effect preset all you need to do is expand either Distortion Presets or Custom Presets, then click the name of the preset you want to use:

In this area layers can be selected, moved and resized. Animations can also be previewed., so to see how it looks you should save and preview the module:

Up Next: Customizing Distortion Effects

You’ve just seen how easy it is to apply pre-made distortion effects with a single click. However you can carry on from there using the options panels to customize with different distortion effect styles, movement, interaction, and a whole lot more.