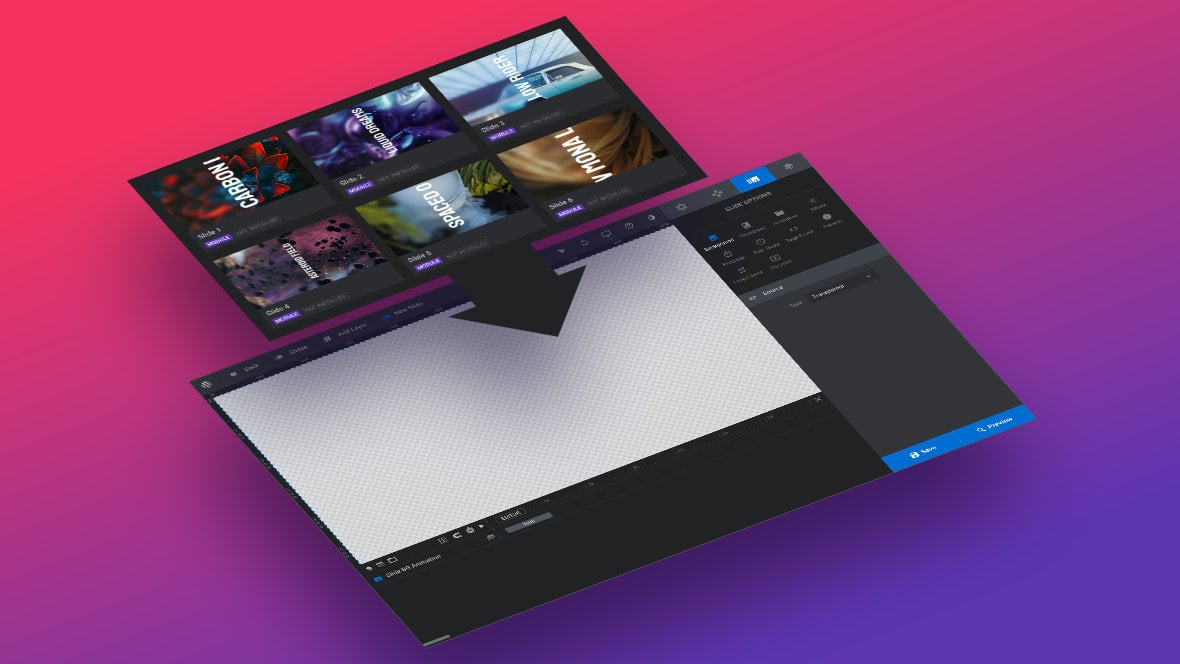 Learn how to import slides from templates and modules by watching the below ‘Using Pre-made Content in Your Own Modules’ tutorial video from the 00:25 mark:

If you watched the above video in full you can skip to the next section of the manual: Animation Fundamentals.

Or continue reading to learn how to import slides into your own modules from templates and other modules.

You will see a fly-out menu that includes the items Import from Modules and Import from Template. Let’s step through what each of these does.

The Import from Template item allows you to pull any slide [?] A "slide" in Slider Revolution is a container into which multiple layers can be added, with layers in turn acting as containers for various forms of media such as images, text, video, audio, buttons, and special effects.

A single module can have one or many slides. A module with one slide is called a scene, and a module with multiple slides is called a slider or carousel. from any template [?] A "Template" is a premade module. It has pre-configured layers already in place.

Slider Revolution comes with several templates you can use, or alternatively you can create your own templates, thereby allowing you to easily reuse modules you have produced. into your Module [?] A module in Slider Revolution acts as a container for slides, which in turn act as containers for layers. Modules are created and edited with the module editor.

Multiple modules can be combined to form rich content such as complete sites and landing pages.. This is a great option if you know you want to use just part of a template without installing the whole thing.

After clicking this item the template library will open, just as it would if you were making an entire module from a template:

The difference is that after you select a template you’ll be taken into an area where you can browse the slides it contains:

Note: You will not be able to browse the slides a template contains if you do not meet the Requirements for that template. You may need to update the Slider Revolution [?] Slider Revolution is a website content creation tool with a focus on captivating animation and stunning visual effects.

It began its life as a plugin for creating slideshows, but has evolved into a fully fledged piece of design software. plugin to its latest version and/or install one or more AddOns [?] Addons extend the functionality of Slider Revolution, adding new controls to the module editor and allowing you to do extra things with your design.

There are dozens of addons available, all included with the full version of Slider Revolution. that the template requires. Refer to Template Requirements for more information.

Hover over the slide you want to use and you will see a “+” button display:

Click the “+” button. The slide will be imported in its entirety into your module, with all its layers and animations ready to go:

When you click this item you’ll again browse a library, but this time only your own modules will appear:

Following the exact same process we have already shown when importing slides from templates, select the module you want. You will then be taken into an area where you can browse the slides it contains:

And just as shown above, hover over the slide you want to import and click the “+” button. Your imported slide will then be added to your module with all the original layers and animations:

Just as you can use pre-made slides in your modules, you can also use pre-made layers. In the next guide you’ll learn about importing layers from both the layer library and from other modules.

Importing Slides from Templates and Other Modules