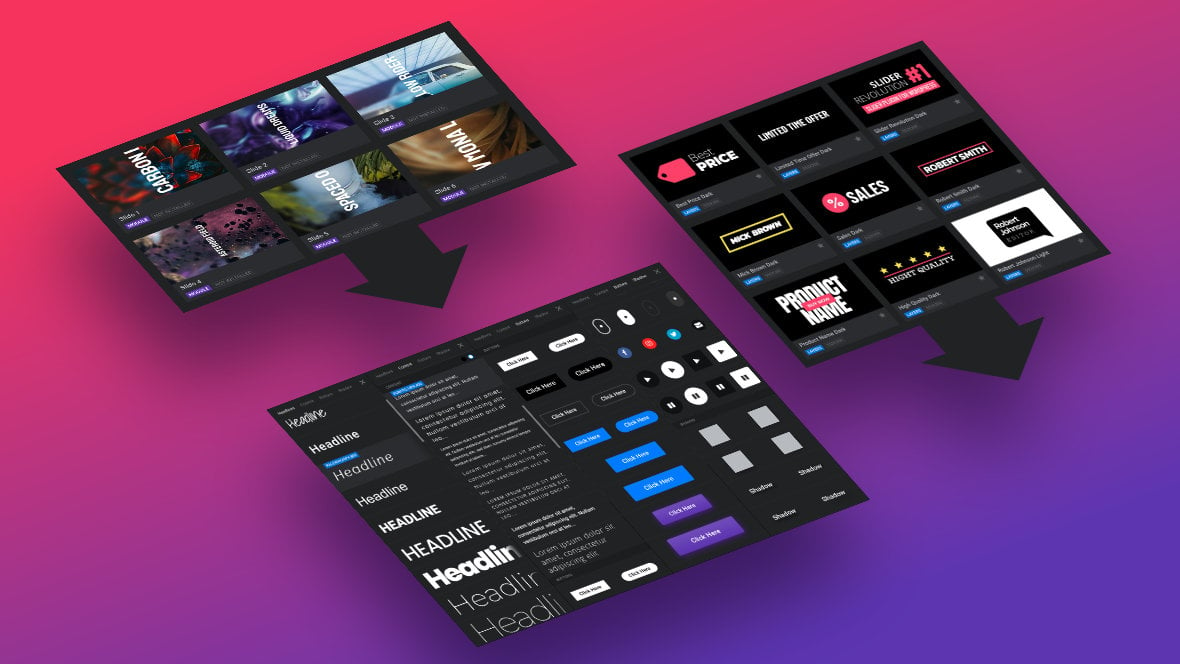 Our focus so far in this manual has been on equipping you with the fundamental skills required to edit template [?] A "Template" is a premade module. It has pre-configured layers already in place.

Slider Revolution comes with several templates you can use, or alternatively you can create your own templates, thereby allowing you to easily reuse modules you have produced. based modules [?] A module in Slider Revolution acts as a container for slides, which in turn act as containers for layers. Modules are created and edited with the module editor.

Multiple modules can be combined to form rich content such as complete sites and landing pages.. You now have all those beginner level skills and a few intermediate techniques as well. That means you’re ready to move onto making your own modules, without the help of templates.

It began its life as a plugin for creating slideshows, but has evolved into a fully fledged piece of design software. still has more help to give at this stage, in the form of pre-made content you can import and use directly in your own modules.

If you watched the above video in full you can skip the remainder of the ‘Using Pre-Made Content‘ section of the manual and proceed to Animation Fundamentals.

Or, continue reading as we step you through how to use pre-made slides, pre-made layers and pre-made text, buttons and shadows.

Slider Revolution allows you to import complete slides [?] A "slide" in Slider Revolution is a container into which multiple layers can be added, with layers in turn acting as containers for various forms of media such as images, text, video, audio, buttons, and special effects.

A single module can have one or many slides. A module with one slide is called a scene, and a module with multiple slides is called a slider or carousel. from templates and other previously created modules.

You can also import individual layers [?] Layers are containers for visual, audio or layout items and are added to slides. For example, text, button, image, audio, video, group and row are all types of layers.

Layers are added to slides via the module editor. either from the included Layer Library or from other previously created modules.

Slider Revolution bundles in several pre-made text layers, buttons, and shadow styles than can be applied to multiple layer types.

Let’s jump in and learn how to utilize slides bought in from templates and other modules.