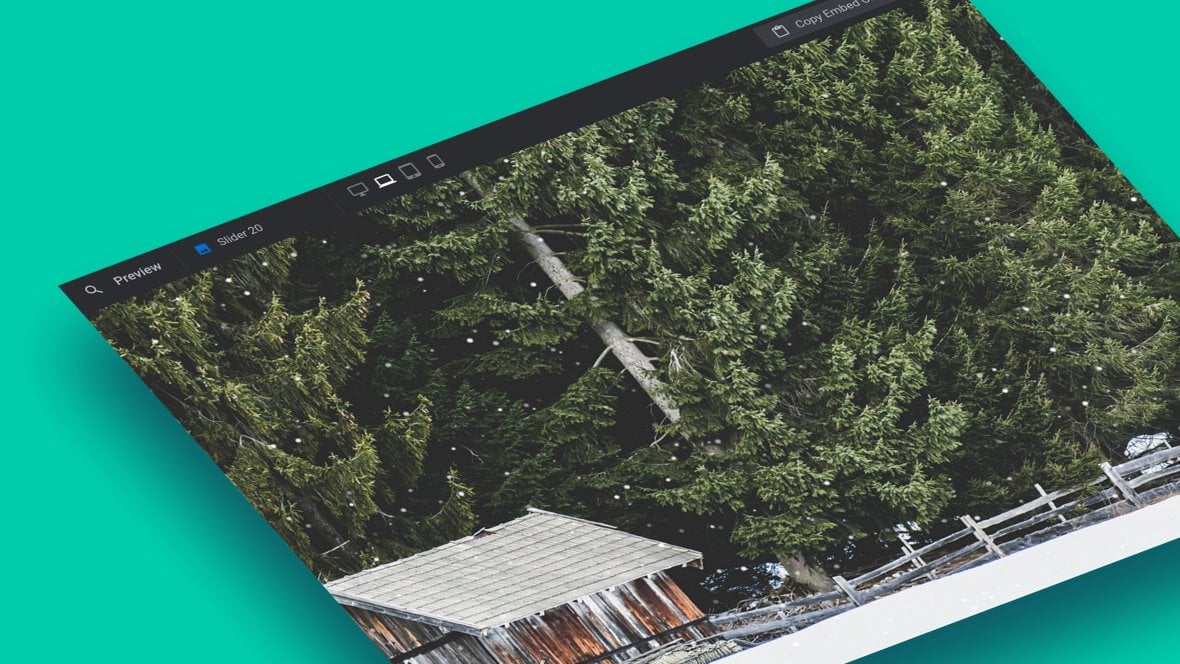 What is a Particle Effect?

A particle effect is an automated animation technique that takes lots of small images (particles) and gives them movement and color in a way that can generate all kinds of beautiful visual effects.

For example, you could take images of a circle and a snowflake:

Then you could use them as particles, and create a beautiful snowfall visual effect:

Using particle effects you can create everything from star fields to wavy oceans to abstract backgrounds.

In this guide, we’ll learn how to get started with the Particle Effects addon [?] Addons extend the functionality of Slider Revolution, adding new controls to the module editor and allowing you to do extra things with your design.

There are dozens of addons available, all included with the full version of Slider Revolution. and integrate particle effects into your modules [?] A module in Slider Revolution acts as a container for slides, which in turn act as containers for layers. Modules are created and edited with the module editor.

Multiple modules can be combined to form rich content such as complete sites and landing pages. with a single click.

The process for doing this is the same as with all addons, so please begin by following the steps laid out in our guide on how to Browse, Install and Enable Addons.

After installing and enabling the Particle Effects addon, you’ll also need to activate it within the module you’re designing.

Because of the fact you might want particles on some slides [?] A "slide" in Slider Revolution is a container into which multiple layers can be added, with layers in turn acting as containers for various forms of media such as images, text, video, audio, buttons, and special effects.

A single module can have one or many slides. A module with one slide is called a scene, and a module with multiple slides is called a slider or carousel. and not others, particle effects are activated on a per slide basis.

For each slide on which you want to use particle effects, go to the Slide Options tab, then the Particle Eff. sub-section, and in the General Settings panel set the Active option to ON:

All the configuration options for the slide’s particle effects are available within this panel.

For a full guide on working with the options in this panel check out the next page of the manual: Customizing Particle Effects

The Particle Effects Library can be found at the top of the Particle Settings panel:

Click to expand the library and you will see it contains an area for ready-made particle effects, named Default Presets, and an area in which you can save your own Custom Presets:

To apply a particle effect preset all you need to do is expand either Default Presets or Custom Presets, then click the name of the preset you want to use:

Note: Particle effects can be white, black, or multi-colored. If you’re just exploring presets to see how they look you might not see them if they’re the same color as your background. To ensure you can see the effect it will help if you add a slide background image or color for it to contrast against.

You also won’t see the particle effect in action on the canvas. To see how it looks you should save and preview the module:

Up Next: Customizing Particle Effects

You’ve just seen how easy it is to apply pre-made particle effects with a single click. However, you can carry on from there and customize a particle effect’s color, shapes, movement, interaction, and a whole lot more.

Learn how to leverage all the available ways to make particle effects your own on the next page, Customizing Particle Effects.