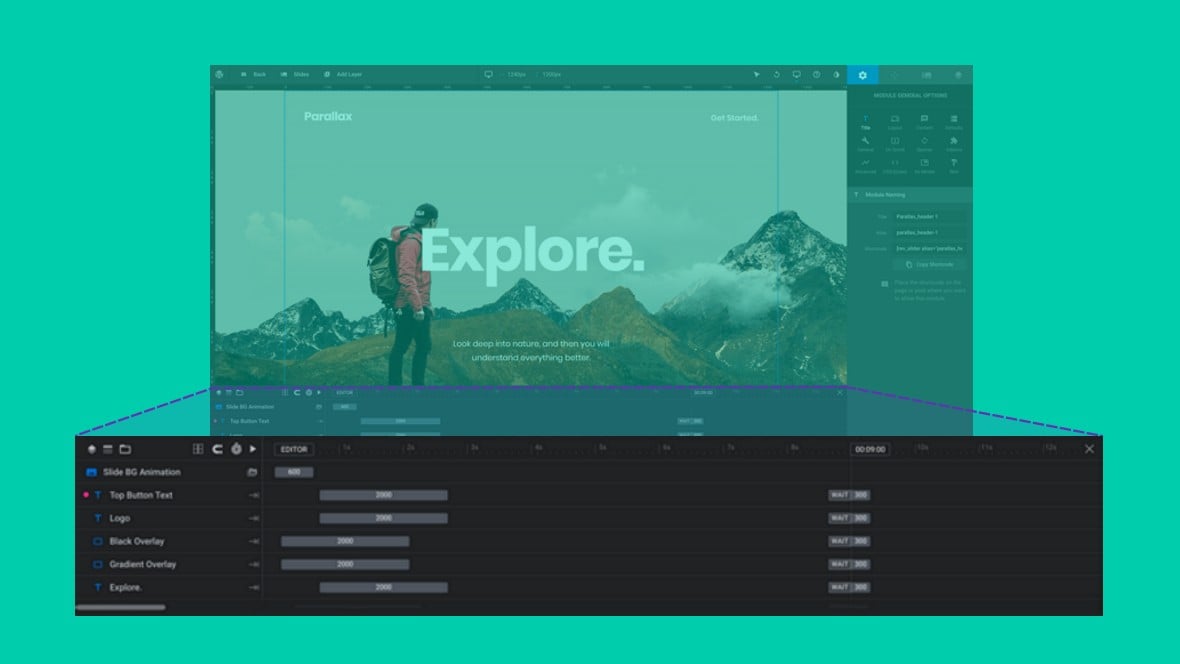 Everything covered in this section of the manual about the timeline can be learned by watching the “A Closer Look at Slider Revolution’s Module Editor, Slides & Layers” tutorial video from the 3:21 mark:

If you watched the above video in full you can skip the remainder of the A Closer Look section of the manual and proceed to Module Editing Basics.

Or, continue reading to learn more about the timeline:

Slide Animation in the Timeline

When you play a slide’s [?] A "slide" in Slider Revolution is a container into which multiple layers can be added, with layers in turn acting as containers for various forms of media such as images, text, video, audio, buttons, and special effects.

A single module can have one or many slides. A module with one slide is called a scene, and a module with multiple slides is called a slider or carousel. animation you’ll see a purple playhead moving from left to right in the timeline, showing you the state of the slide’s layers [?] Layers are containers for visual, audio or layout items and are added to slides. For example, text, button, image, audio, video, group and row are all types of layers.

Layers are added to slides via the module editor. at different time markers, e.g. the 1 second mark, 3 second mark and so on.

The actual “time” part of the layers being animated is shown horizontally from left to right.

Top to Bottom Shows the Layers In The Animation

From top to bottom in the timeline is your stack of layers. Each track [?] A track is one of the horizontal spaces in the module editor's timeline. It is the representation of a layer within that timeline, used for controlling the animations and sorting order position of that layer., i.e. each horizontal line in the timeline corresponds with a layer.

In this area layers can be selected, moved and resized. Animations can also be previewed.. The layer stack in the timeline gives you an additional way to select layers: just click on the name area at the left end of the track for a given layer and it will be selected in both the timeline and on the canvas.

When you have a slide with several layers this can be the easiest way to select the specific layer you want to modify.

Sometimes you will need to modify this sorting order. To do so, click and drag the track for a layer and move it either up or down in the timeline’s layer stack. As you drag you’ll see a blue line indication where in the stack the layer will be inserted if you drop it.

The only exception is the special background layer which, despite being locked in position at the very top of the layer stack, will always be displayed behind all other layers on the canvas.

These strips represent something about the layer changing over time, for example, changing from being completely transparent to fully opaque.

That covers the main functions of the timeline. Next up we’ll look at the third section of the module editor, that being the sidebar, where we find settings & saving controls.

The Timeline: Animation and Layer Control