Skip to content
Posted in ResourcesPublished on August 16, 2021 By Dirk Gavor

CSS generators are very useful tools for website designers and developers. Many website owners want to add special design effects to their web pages. This may include shadowing, shading, overlays, doodles, and more. CSS generator tools allow designers to add these features to a website with little effort. 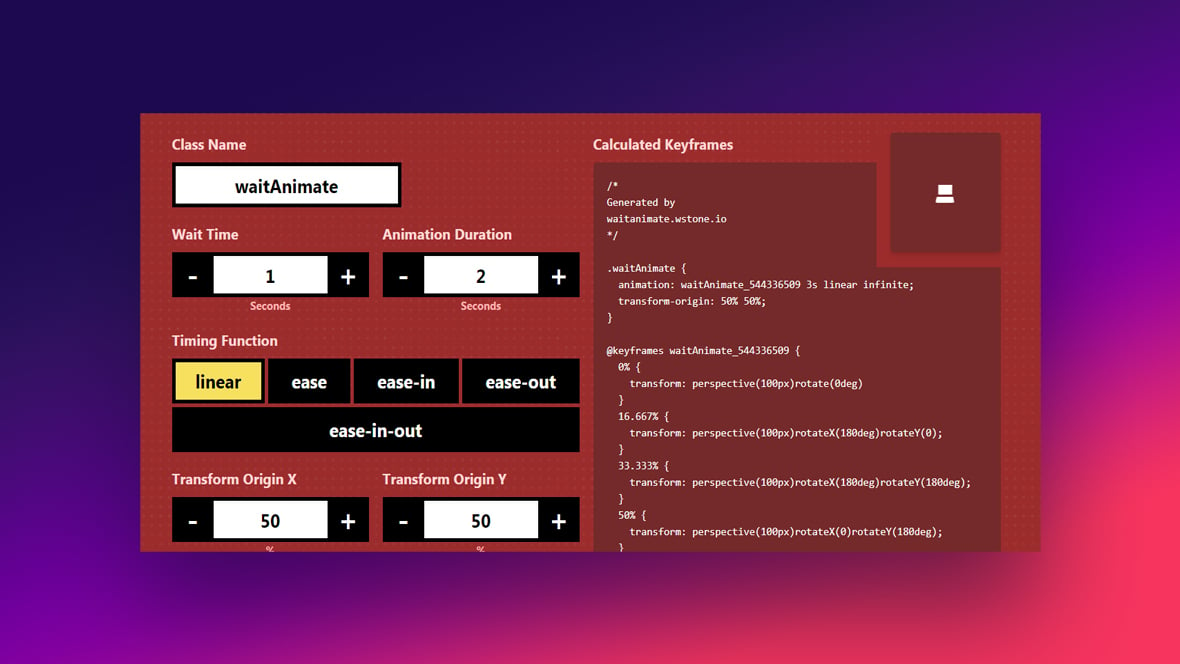 CSS generators are very useful tools for website designers and developers. Many website owners want to add special design effects to their web pages. This may include shadowing, shading, overlays, doodles, and more. CSS generator tools allow designers to add these features to a website with little effort.

Online generators help developers build on their code quickly and with ease. The first step is to decide what kind of CSS effect you prefer. The next step is to find the proper tool that will generate a CSS code for that effect.

This article lists several CSS generator tools. They generate all different kinds of CSS effects and, more importantly, they are free. Search through them to find the CSS generator you are looking for. Then you will be on your way to creating an awesome website.

Coolors is a color palette generator. There are many color scheme generators on the internet but this one provides very useful features. Users can generate a palette by hitting the spacebar. If they want to save a color, they can lock it into place or save it to their favorites.

If users already have a color in mind for their palette, they can select it on the color inspector. Then the generator will generate colors that match that color. Or users can upload an image and Coolors will extract its color scheme.

More cool features of this generator include its ability to adjust to a person who is color blind. Users can also change the hue, saturation, brightness, and temperature of any color. After selecting the color palette they want, users can export it as CSS.

This generator, created by Chris Coyier, was meant to be a technology demonstration. It has also proved useful for CSS3 developers. The generator creates a CSS code for button effects. It does not support the most extreme CSS properties but it is one of the only generators that shows hover effects.

Users can change the gradient of the top color, bottom color, border colors, hover colors, and more. They can also adjust the size of the button, the space between the text and the border, and the border-radius. After designing the button they want, users can click on the button and copy the CSS code.

This next CSS generator generates typographic styles. Users enter some text, then they can adjust various aspects of the text.

They can adjust the:

The text is shown in real-time so users can see what it will look like on the web page. Then they can copy the CSS code. The only downfall to this generator is the limited font options.

Many fonts come with default headings and margins. If a fallback font and a web font are different, the layout of the text will change dramatically. The generator Capsize helps developers avoid this problem. It adjusts the height of capital letters by trimming the space above them and below the baseline.  Keeping the line height the same in fallback font and web font means that the switch will be seamless.

This generator helps create attractive buttons. It allows users to adjust the following:

It has up and down arrows instead of sliders to let users adjust the measurements. It provides cross-browser CSS code. It also allows users to store and share button styles. Or users can browse showcased buttons and then adjust them to fit their needs.

Users can choose how to transition the colors and where to do it. They can also choose a color but cannot add a HEX value to it. This generator is available as a Sketch plugin and a PostCSS plugin.

The ColorZilla Gradient Editor creates custom gradients. Custom CSS gradients are difficult to create, but this editor is simple and easy to use. It has a visual editor so users can make multiple adjustments and see them applied in real-time. Users can move sliders around to change color positions and generate a CSS code.

Keyframes is a generator and visual editor that helps users create CSS code for their entire project. It creates animations, shadows, and colors with more features coming soon. KeyFrames provides a timeline editor that allows users to adjust animations.

Users can change sizing, position, colors, and add transformations. Then users can copy and paste the CSS code. This generator offers an animation panel in Chrome and Firefox for debugging and creating CSS animations. Overall, it is a simple and easy-to-use visual editor.

This generator tool allows users to preview and compare animations. It also lets them slow the animations down and adjust them. Then users can copy and paste the code into their project immediately.

LayerStyles is a CSS generator that applies CSS3 effects using a layer style dialog box. It controls effects such as:

This editor is familiar to anyone who uses Photoshop or other Adobe products. In the left bottom corner, users can click on the code viewer and copy the CSS.

This next tool generates many different CSS effects. Users can define the following:

Users can adjust these settings by moving sliders. There is a preview area that shows the adjustment in real-time. The generator also shows which browsers and mobile devices support the CSS properties. The code can be copied or downloaded with an HTML file that demonstrates the effect.

Patternify is a CSS pattern generating tool with a visual editor. It outputs the image URL and provides a base64 code that users can paste into CSS. It allows users to adjust colors, patterns, size, and more. Users can manage everything from the browser so all they need is an internet connection. The only downside is its limitations due to the pixel-by-pixel graphic interface.

It provides a visual editor that allows users to form plain and organic shapes. It is easy to use, allowing users to slide tabs back and forth to create the shape that they want. Then they can copy the code and add it to their CSS.

Enjoy CSS is a generator and visual editor for various CSS effects. Users can generate buttons, shadows, transitions, and much more. Its best feature is the gallery that has predefined templates and free code snippets for inputs, buttons, etc. Users can test the different effects to see how they will look in the browser.

The CSS3 Generator provides traditional examples of code snippets that developers use in everyday situations. It has over ten different generators for different effects. The generators include ones for:

After users fill in a few options the background becomes the preview element. It will apply the data and display what the user has created.

This tool from BeautifyTools converts SCSS code into CSS. This auto code generator is a useful tool for those trying to build and launch a website seamlessly. Based on the structure and predetermined settings, this tool automatically generates CSS from raw SCSS code. It also enables code minification and combines multiple files.

This shadow generator tool, created by Philipp Brumm, is now available as a Figma plugin to optimize workflow. This generator allows users to design a smooth layered box shadow. They can adjust the number of layers, the transparency, the vertical distance, the blur strength, and the spread.

Will Stone created this generator to help users create pauses between animations. CSS does not provide a property to pause an animation before it starts the loop again. But the WAIT! Animate generator helps users create custom repeating pauses. It generates the right code to get this feature to work properly.

In general, CSS is easy to work with. However, certain special effects can cause coding complications. CSS generator tools are very useful. They save time and energy and allow users to give their projects an extra edge.

The above CSS generators are some of the most useful code generators available today. They are also free. Hopefully, they help you to save time and generate useful solutions for your day-to-day work.

If you enjoyed reading this article on CSS generator examples to use, you should check out this one about CSS image effects.

The Best CSS Generator Tools You Can Use Right Now