Skip to content
Posted in ResourcesPublished on August 9, 2021 By Dirk Gavor

Website designers face many difficult decisions about how to design the UI. One such decision is whether to use a digital toggle switch, radio buttons, or checkboxes. 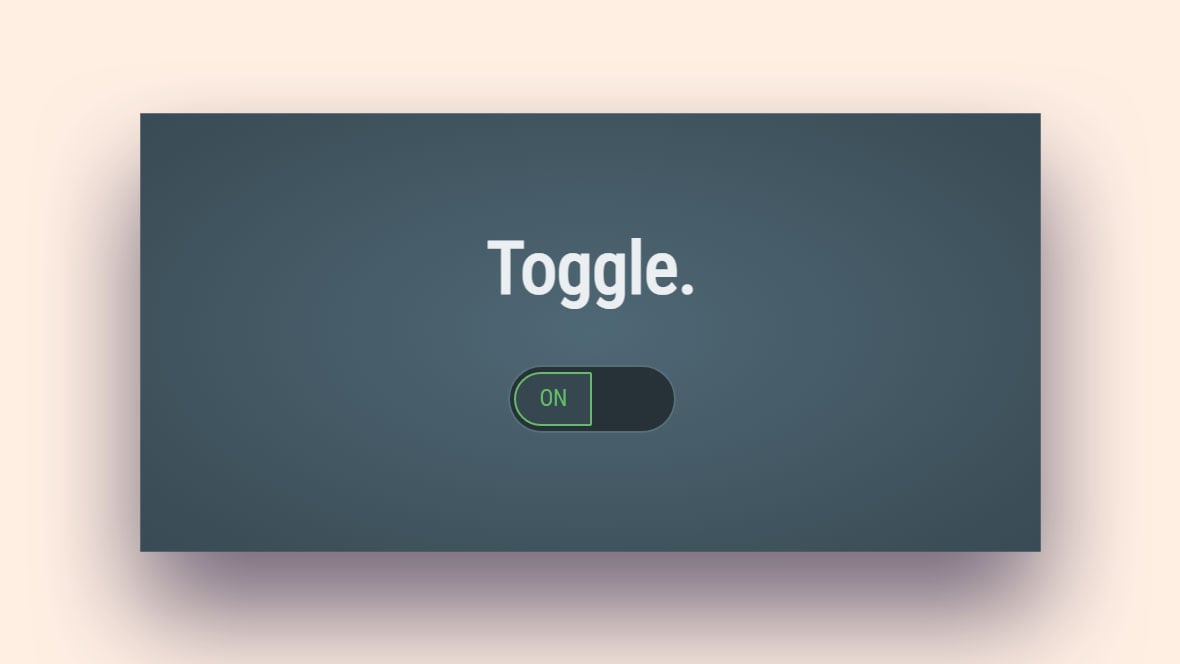 Website designers face many difficult decisions about how to design the UI. One such decision is whether to use a digital toggle switch, radio buttons, or checkboxes.

Digital toggle switches give a website a more modern feel. They allow designers to include micro-interactions.

Another benefit to toggle switches is that they work immediately. Radio buttons or checkboxes need users to hit a submit button before the choice goes into effect.

A toggle switch allows users to choose between two opposing states, such as on or off. If there are multiple options, it’s best to use something else.

One usability issue to look out for is an unclear state indicator. Some users get confused about whether the label indicates the state the toggle is in or the result of clicking on it.

For those looking for a CSS toggle switch to use on their website, here are a few options:

This first pure CSS toggle switch design adds an interesting flare. It displays the sun and a cloud to indicate the on position and the moon and stars to indicate off.

Here is another toggle button that turns off boring.

It is perfect for a cooking or kitchen-related site. It presents a frying pan that is cooking pancake batter.

This switch replaces the traditional toggle circle for a cat emoji. It adds a little extra excitement to a website.

Also, it is easy to add to a website’s code.

This toggle switch uses a sub sandwich and a “sup” hand gesture emoji. It is designed for a subscription purpose.

This is a simple and traditional toggle switch with bright colors. It uses pure CSS and a clean HTML markup.

It includes a label but designers do not have to use it if they do not want to.

Here is another traditional toggle button.

The toggle lights up green to indicate “on”. It uses CSS grid animations.

To mix things up a little, this CSS toggle switch makes a smiley face when in the position relative to “on”. It makes a frowny face for “off”.

This switch imitates an iOS toggle button. It is an HTML and CSS switch.

This HTML and CSS toggle button uses mini animations within the switch to delight the user. The background displays a switch label so users know when it is active and when it’s not.

For those who like to add a little spin to their toggle switches, here is a rolling toggle switch. When a user clicks on it, it rolls from off to on and vice versa.

This toggle switch takes a modern design and makes it futuristic. Glowing green and red border colors and labels indicate the switch’s position.

Tiberiu Raducea designed a quick-moving switch. Toggle back and forth from a checkbox to an “x”.

It is a pure CSS and HTML button.

This CSS and HTML switch slides the circular toggle from side to side turning orange and blue. A label below the switch indicates whether the switch is on or not.

Felix De Montis created a toggle switch for those who appreciate a boxy form rather than a circular one. The background color turns from green to red indicating its position.

This code uses a toggle switch to change the whole color of the page. This switch concept would work well for websites that want to compare something.

Here is another HTML and CSS code that adds a creative element to a website. It takes the traditional concept of a toggle switch and adds a little flair.

On the position relative to “on” the switch is white with a black toggle. When users flip the switch the background color is enveloped by black and the toggle turns white.

Himalaya Singh calls this a confusing toggle button because it includes an element of mystery. When users press on the switch it initiates an engaging animation effect.

This code creates a toggle switch on a skew. Turning the toggle on and off changes the direction of the skew.

The design concept of this toggle switch was to create the feeling that a toy was rolling from side to side.

Here is a Star Wars-inspired toggle switch. It toggles between the side of the Rebels and the Empire.

This is a simple switch. It toggles between “Yes” and “No” with a clear label indicating the user’s choice.

This HTML, CSS switch leans toward the antsy feeling. The toggle bubble moves around a lot, bouncing up and down and from side to side.

It is a great toggle for an option that people are excited about and cannot wait for. The sample shows a choice between tacos and pizza.

This code pen allows designers to style a semantic checkbox to behave and look like a toggle button.

Here is another option for a night and day toggle button.

Here is a subscribe toggle button. It uses the famous woman yelling at a cat meme as its background.

Jhey created a code that has multiple toggle buttons. Try selecting all options.

In theory, someone can extend its functionality to work as a multiple-option radio button.

This code pen has switches with different animations, effects, colors, and styles. Surely, one of these options will fit your next project.

This HTML and CSS switch option presents a bear with a toggle in place of its mouth. When users switch the toggle on and off, the bear changes direction and winks.

It is a perfect option for outdoor websites, animal websites, etc.

This switch redefines the definition of toggle switches.

Here is a collection of CSS3 switches. It includes switches that flip, 3D flip, slide, switch, and water-fill.

As emojis become more and more popular they have started to be like another language. Using only emojis, this code pen displays a collection of switches.

For example, one of them toggles between the cow emoji and the glass of milk emoji.

To create a hot switch, this code pen presents a switch that toggles between fire and ice.

Here is a super simple switch.

Toggle from right to left with no labels. The only indicator is a slight border color change.

Here is a third option for a night and day toggle button.

This switch features a cartoon design character that toggles from awake to asleep. This is a good switch for a children’s website or an educational site.

This code pen presents a collection of switches with animation elements. One includes a tribute to Kobe Bryant, one has pancakes, another one uses gravity.

These switches provide a funny and engaging style that many users will enjoy.

One uses a flip to change from on to off. Another slides and another one bounces.

Anastasia Goodwin uses a switch with border-radius 50%. The whole page changes color and the animation in the toggle changes as users turn it off and on.

Rafael Gonzalez offers a few switch options with a flat design. Each one has its own style and animation.

Here is a toggle button in the design of a fuel gauge. When users click on it the gauge goes from empty to full.

This code pen presents some toggle-style checkbox buttons. Some are square and others have a round border-radius.

Here is another collection of various toggle-style buttons. Some flip, have a round border-radius, or have a flat design.

For those who want switches that stand out, this is a good option. The design is diamond-shaped to create an SVG switch.

This code pen provides several different animations that toggle from yes to no in a creative way.

Look here for a few funky toggle switches. Choose between a neon CSS switch, a happy and sad switch, and much more.

Jon Kantner created a toggle button that displays a tire speeding to the other side of the switch.

This provides different sized and colored traditional toggle switches, each with a label.

The examples above show how versatile, useful, and creative toggle switches can be. A CSS toggle switch can make a great impression and offer users a helpful feature.

Any of the above options would give a website’s design a fun and useful element.

If you enjoyed reading this article on CSS toggle switch, you should check out this one about CSS and registration login forms..

Great CSS Toggle Switch Options You Can Use On Your Site