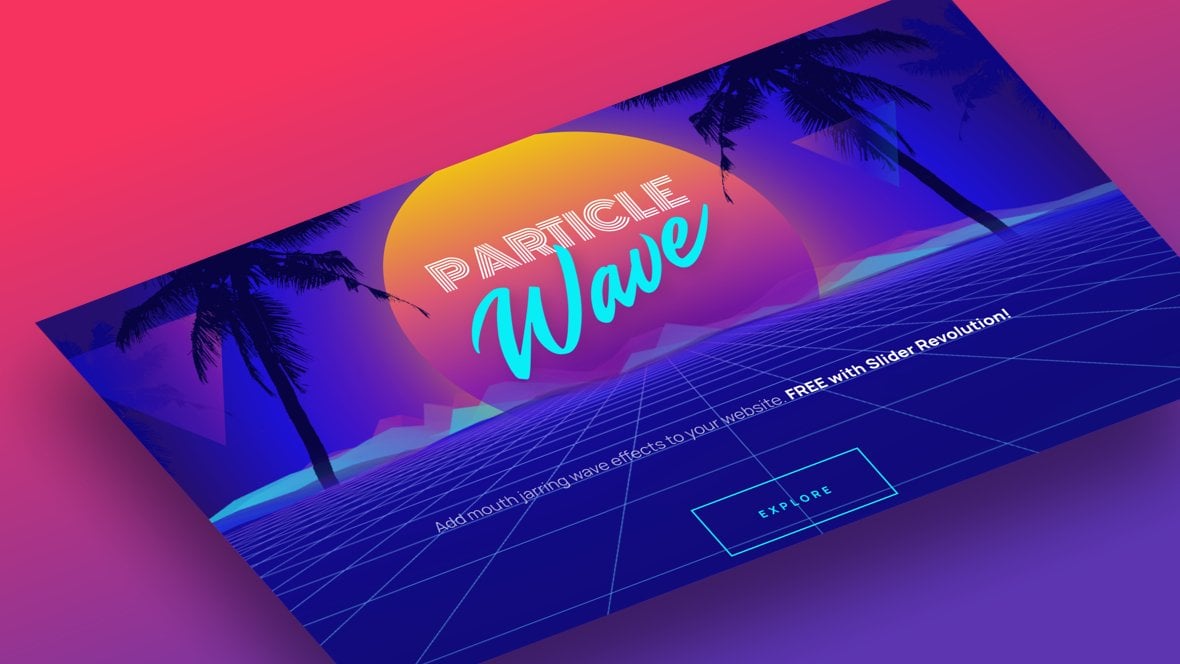 What is a Particle Wave?

A particle wave is a special kind of particle effect, used to create all kinds of different automated wave style animations.

The addon’s [?] Addons extend the functionality of Slider Revolution, adding new controls to the module editor and allowing you to do extra things with your design.

There are dozens of addons available, all included with the full version of Slider Revolution. combination of particle graphics with lines & fills between them, are made to flow and rotate and look like everything from a rotating strand of DNA to a rippling synthwave ocean:

In this guide, we’ll learn how to get started with the Particle Wave addon and integrate particle effects into your modules [?] A module in Slider Revolution acts as a container for slides, which in turn act as containers for layers. Modules are created and edited with the module editor.

Multiple modules can be combined to form rich content such as complete sites and landing pages. with a single click.

The process for doing this is the same as with all addons, so please begin by following the steps laid out in our guide on how to Browse, Install and Enable Addons.

Particle waves each have their own dedicated layer [?] Layers are containers for visual, audio or layout items and are added to slides. For example, text, button, image, audio, video, group and row are all types of layers.

Layers are added to slides via the module editor.. Because of this, if you wish you can stack multiple particle waves on top of each other creating really interesting effects, such as that seen by combining an ocean wave and grid wave in our Particle Wave Showcase template, pictured above.

To add a particle wave layer to a module, in the module editor [?] The "Module Editor" is the tool used to create & modify modules.

Through this visual, drag & drop, no-code interface you can add various types of layers, animation and special FX to your modules, as well as managing slides and configuring options. go to Add Layer in the top menu, then click ParticleWave:

In this area layers can be selected, moved and resized. Animations can also be previewed., as well as its corresponding track [?] A track is one of the horizontal spaces in the module editor's timeline. It is the representation of a layer within that timeline, used for controlling the animations and sorting order position of that layer. appear in the timeline [?] The timeline is the section of the module editor dedicated to animation and controlling the stacking order of layers.

By default, a newly added particle wave layer is relatively small, and you’ll almost certainly want to resize it.

This can be done through clicking the drag handles on the corners of the shape, but the most common use case with particle waves is probably to have them cover the entire layer area.

To make this happen select the particle wave layer, go to the Layer Options tab in the sidebar, click and go into the Size & Pos sub-section:

As a result the particle wave will spread out to cover the entire layer area, like so:

Note: You may need to save and refresh the page in order to restart the particle wave and see it at its new size.

Under the Layer Options tab for any selected particle wave layer, you’ll see it has a sub-section named Particle Wave:

Inside that sub-section is a panel named Wave Default Attributes:

All the configuration options for the selected particle wave are available within this panel.

The Particle Effects Library can be found at the top of the Particle Settings panel:

Click to expand the library and you will see it contains an area for ready-made particle waves, named Default Presets, and an area in which you can save your own Custom Presets:

To apply a particle effect preset all you need to do is expand either Default Presets or Custom Presets, then click the name of the preset you want to use:

You should then see your selected particle wave preset animating on the canvas:

Note: Particle waves can be white, black, or multi-colored, so If you’re just exploring presets to see how they look you might not see them if they’re the same color as your background [?] A "background" in Slider Revolution is a type of layer that is always present in every module, and is always visually behind all other layers.

A background can be transparent, a flat color, a gradient, an image, or a video. It can be animated in the same way as other layers can be, however it cannot be deleted.. To ensure you can see the effect it will help if you add a slide [?] A "slide" in Slider Revolution is a container into which multiple layers can be added, with layers in turn acting as containers for various forms of media such as images, text, video, audio, buttons, and special effects.

A single module can have one or many slides. A module with one slide is called a scene, and a module with multiple slides is called a slider or carousel. background image or color for it to contrast against.

Up Next: Customizing Particle Waves

You’ve just seen how easy it is to apply pre-made particle waves with a single click. However you can carry on from there and customize a particle wave’s color, motion, wave effect, special effects, and a whole lot more.

Learn how to leverage all the available ways to make particle waves your own on the next page, Customizing Particle Waves.