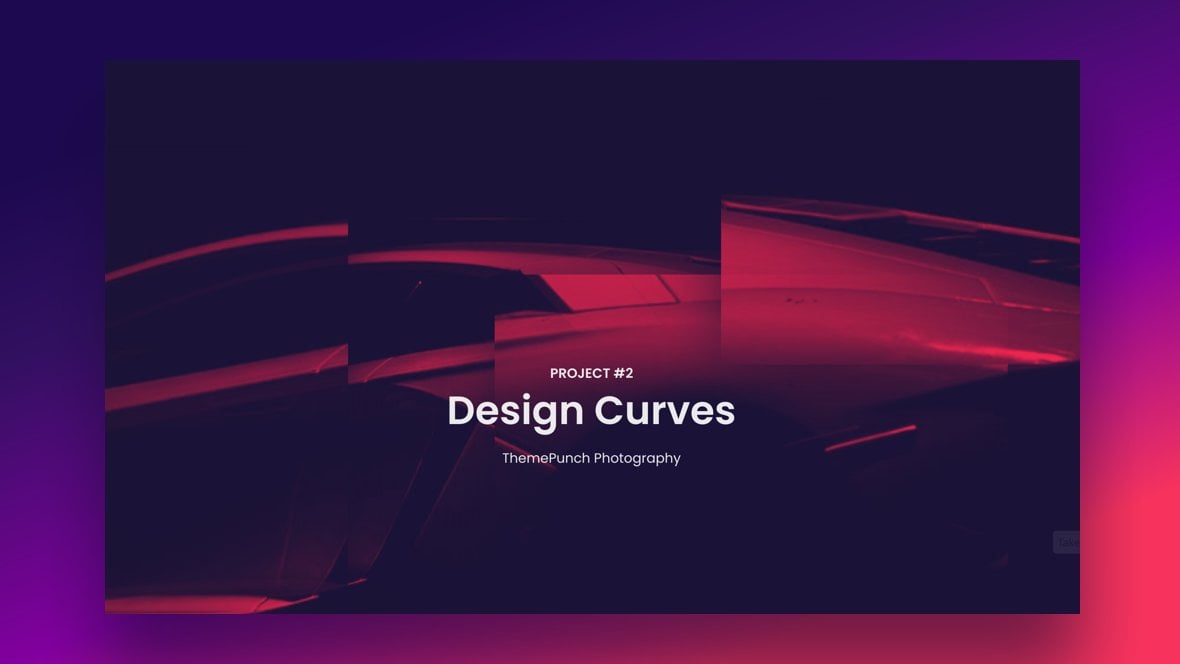 What does the Slicey Addon do?

With Slicey you can ‘slice’ up a background image into one or more pieces, each of which can then be individually animated to create captivating 3D-style visual effects:

To get started with the Slicey addon you’ll first need to install and enable it:

After installing and enabling the Slicey addon, go to the Layer Options tab and you’ll see the Slicey sub-section there:

However, there will be nothing visible in this sub-section until you add your first Slicey Layer.

A Slicey layer is a rectangular shape that takes a snapshot of an equally sized section of the background image, then applies a zooming effect to it, as well as an optional blurring effect.

For example, here you can see a Slicey layer sitting over the top of a background image:

And here is how that Slicey layer looks when previewed:

To add a Slicey Layer, in the module editor go to Add Layer in the top menu, then click Slicey Layer:

You’ll see the Slicey Layer appear as a dark rectangular shape on the canvas:

The Slicey Layer will have a corresponding track in the timeline:

Each Slicey Layer has its own dedicated layer. Because of this you can place multiple Slicey Layers onto the canvas to create some really interesting 3D-style effects, such as those seen in our Parallax Zoom Slices template.

Note: A Slicey Layer uses the image from a slide’s main background for its effect. Add a background image by going to the Slide Options tab, then the Background sub-section, and then in the Source panel click either Media Library to use your own image, or Object Library to choose an image from Slider Revolution’s free image library.

If you need further help with background images, refer to our guide on Changing Template Background Colors and Images to learn more.

Resize and Reposition the Slicey Layer

A newly added Slicey Layer has a default size and default position on the canvas. You’ll likely want to resize it and move it to the area of your background image where you want to create your slicey effect.

To reposition it, click and hold your left mouse button anywhere on the shape. It will appear slightly lighter and you’ll see an indicator that displays the X and Y coordinates for the layer’s current position, which will update in real time as you reposition the shape:

Once you have moved the shape to where you want it to be, release your mouse button.

To resize it, make sure the Slicey Layer is selected, then look for the small white-circle handles along the sides of the shape.

To resize width, click and hold your left mouse button on the left or right white circles:

Move your mouse left or right to resize, then release the mouse button. You’ll see an indicator that displays the W (Width) and H (Height) of the shape in pixels. When resizing width, the width of the shape will update in real time without affecting the height.

To resize height, click and hold the left mouse button on the top or bottom white circles:

Move your mouse up or down to resize, then release the mouse button. You’ll see an indicator that displays the W (Width) and H (Height) of the shape in pixels. When resizing height, the height will update in real time without affecting the width.

You can also manually resize all sides at once while maintaining the layer’s aspect ratio. Click and hold the left mouse button on the large white circle visible on the bottom right corner of the Slicey Layer:

Move your mouse diagonally to resize, then release the mouse button

Alternatively, repositioning and resizing can both be performed from the sidebar. Go to the Layer Options tab, then the Size & Pos sub-section, and then adjust the fields in the Position & Size panel as required:

Once a Slicey Layer has been added, the Slicey sub-section in the Layer Options tab will be updated with a new Slicey Layer Settings panel:

The Scale Offset field allows you to choose a percentage (%) by which the Slicey Layer will offset itself from the background image as part of its panning and zooming movement:

Slicey Blur From & To

The Slicey Blur From field allows you to set the level of blur the Slicey Layer will have at the start of its animation:

The Slicey Blur To field allows you to set the level of blur the Slicey Layer will have at the end of its animation:

The blur itself applies to the area of the slide’s background image that the Slicey layer covers. For example, this Slicey layer has a blur of 5px applied to it:

To further customize the visual effects around your Slicey Layer, go to the Slide Options tab and select the Slicey sub-section. You’ll see the Slicey Update on Pan Zoom panel:

The settings available here help you control the behavior of your slide’s background image. It is through modifying the movement of your background image and your Slicey layers separately that the 3D-style visual effects of the Slicey addon are achieved.

The Zoom From and Zoom To fields allow you to set how much the background will be scaled from the start to the end of the Slicey animation:

The Rotate From and Rotate To fields give you control over the 2D rotation of the slide’s background image during the Slicey animation:

For example, if you set Rotate From to 0deg and Rotate To to 5deg, the background image will rotate clockwise from 0 to 5 degrees over the course of the Slicey animation.

To rotate anti-clockwise, set the Rotate To field to a negative value, ie. -5deg.

The Blur From and Blur To fields allow you to apply an amount of blur to the start and end states of the slide’s background image during the Slicey animation:

The Blur From field allows you to set the level of blur that the slide’s background image will have at the start of its animation.

The Blur To field allows you to set the level of blur that the slide’s background image will have at the end of its animation.

For example, if you set Blur From to 0px and Blur To to 5px, the background image will transition from zero (0) to 5 pixels of blur over the course of the Slicey animation.

The Easing option can be used to smooth out the start and end of the Slicey effect. Click the Easing drop-down, then select your preferred easing preset:

Note: Certain Easing presets can significantly change or override certain Slicey animation settings. For this reason, it is a good idea to set Easing to None until you have configured all other options, and then play around with Easing settings until you achieve the desired effect.

The Duration setting allows you to specify in milliseconds(ms) the total amount of time that the Slicey animation will run for:

The time in the Duration field applies to the animation of each Slicey Layer as well as the slide’s background image.

Your Slicey Update on Pan Zoom panel settings can be previewed directly on the canvas by using the triangular play button in the sidebar:

You can also select and drag the white circle play head on the preview bar to manually scrub through the animation:

You can learn more about previewing animations in our section on Previewing Animations.

The options here allow you to add either a shadow or border effects to your Slicey Layers.

You can change the color of your Slicey Layer’s border here. Click the little color swatch to the right of the Shadow Color option text:

Note: A shadow or border will not be visible around your Slicey Layer until a value is set in the Blur and/or Border Size fields.

The Blur field allows you to apply a blur to any shadow added to a Slicey Layer:

By default the Blur field is set to zero (0), meaning no blur will be applied. Set any value from 1px to 500px, and the higher the value the softer the shadow will be.

In this example, a transparent black color is applied along with a blur of 20px:

Note: When using this panel to create a shadow effect the Border Size option behaves as an intensity setting for that shadow.

The Border Size option has a dual functionality, and can be used to specify the size of the border you want to apply, or the intensity of your shadow:

By default the Border Size field is set to zero (0), meaning the Slicey Layer will not have a border applied. A size value of 1px to a maximum of 500px can be set.

Borders set to a value of 1px or higher are solid by default, utilizing the color as set in the Shadow Color field. For example, this Slicey layer has a 3px white border applied, with a blur of 0px:

You can then optionally use the Blur field to apply a blur to the solid border, generating a shadow effect.

You can also control the transparency of the border by adjusting its opacity in the color picker, accessed via the Shadow Color field.

To learn more about working with the Slicey addon, one of the best things you can do is explore with some of our ready-made templates that put the addon into action. Try starting with the Parallax Zoom Slices template.